Whether they’re frosted, filled or flipped, everyone loves the sugary deliciousness of a good cupcake! And in a food-centric city like Austin with nearly just as many restaurants as residents, even the pasty scene is strong. Ever since The Food Network brought televised competitive baking to the masses with shows like Cupcake Wars and Cake Wars, the newest bakery trend is a cafe dedicated to delectable and creative cupcake creations. So for all the fellow food fanatics looking for a unique sugar rush, here’s a list of some of the craziest cupcakes in Austin and where to find them.

Located in trendy east Austin, Sugar Mama’s Bake Shop is a charmingly quirky bakery that has become so popular they recently expanded to a second shop in south Austin. Several of the cupcake creations from owners Olivia and Steve O’Neal’s spectacular menu have won awards in the hit food series Cupcake Wars, and they keep adding to their diverse list of sweet treats every day. This Austin original keeps it real with scratch recipes, fresh ingredients and both vegan and gluten free options available in a variety of cupcakes. Some of their more popular tasty cakes include the award-winning Champion Carrot Cake, chocolatey Apocolypse cupcake and Harlow’s Honey Baklava. But the craziest – and hands down most requested – cupcake on the menu is definitely the breakfast-style French Toast cupcake, with maple cinnamon chip cake, maple syrup, cinnamon cream cheese frosting and real bacon pieces!

Tip: The east side location also features a selection of local beers and wines to accompany your sweet treat.

Owned and operated by husband and wife duo Ben and Olga, the adorable Polka Dots Cupcake Factory is a bright, cherry cupcake cake located in the heart of downtown Austin. Each delicious little cake is made fresh daily with local ingredients and brilliant flavor combos, with something satisfying for every cupcake lover. The mouth-watering menu at Polka Dots features a handful of tried-and-true cupcakes like the Vanilla Vanilla, Red Velvet and Triple Chocolate, plus a rotating daily selection of seasonal saccharine offerings ranging from Salted Cookie Dough and Cinnamon Sugar to more exotic flavors like Tres Leches and Tiramisu. For something with a little more class – and a little more booze – try the Mixed Berry Chardonnay cupcake, a fruity yet elegant masterpiece.

Tucked in a low-key shopping center in way-south Austin, Sweet Treets is a divine little bakery that specializes in custom wedding cakes, cakeballs, cupcakes and a selection of sinful “treets” like s’mores tartlets, cheesecakes, full sized pies and bite sized pies, for all the flavor and half the guilt. Their scrumptious cupcakes are dished out in singles or by the dozen, with vegan, nut free, dairy free and gluten free options available upon prior request. Each cupcake flavor at Sweet Treets comes with an adorably sassy name and an even sassier sweet taste, including ‘Luscious Lemon’, ‘OMG!!! Chocolate’, ‘Voluptuous Red Velvet‘ and ‘Chai Love You!’. But kookiest cupcake flavor on the list has to be the Mimosa cake, with real, booze-infused whipped mimosa buttercream! It’s like a Sunday Funday brunch in a cake!

Tip: Try one – or a dozen – of their adorable cakeballs in a variety of flavors like Mexican Chocolate, Southern Pecan Pie, Heath Bar Crunch and Birthday Cake. 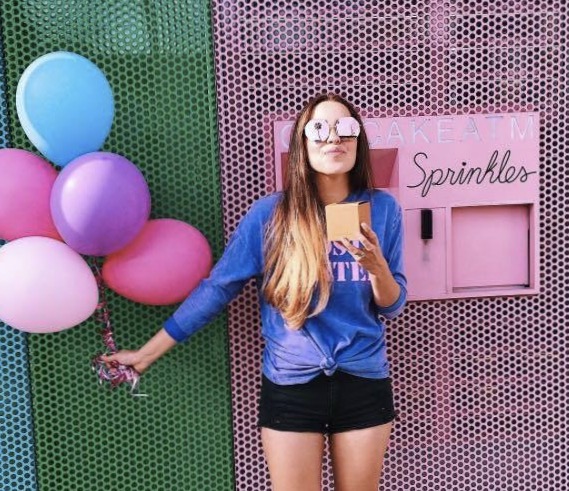 This funky cupcake chain has locations all over the U.S., including Austin, but what makes Sprinkles Cupcake Bar totally unique to the sweets scene is their one-of-a-kind cupcake ATM. That’s right, it’s an ATM that dispenses fresh cupcakes! Located in north Austin near the Domain, this cute cake shop serves up cookies, ice cream, cakes and cupcakes for all palates. So whether you’re in the mood for a frozen treat, a crunchy treat or maybe even an a la mode treat, Sprinkles is the ideal dessert spot. Their impressive list of thoughtfully-created cupcakes includes Banana Dark Chocolate, Salty Caramel, Lemon Coconut, Peanut Butter Chip and Triple Cinnamon – they even have a Doggy Cupcake for your fellow four-legged friend! For a dark, sugary pick-me-up, try their amazing Cuban Coffee cupcake, with Belgian light coffee cake, cinnamon, cocoa and a super strong coffee frosting to keep you going all day.

Tip: During the warmer months, try a scoop or two of ice cream in Sprinkles’ special red velvet waffle cone.

Boozy Car Bomb Cupcake at CupPrimo Located in north Austin, the cozy a friendly cupcakery CupPrimo has been serving up sweets and smiles since 2008. This warm bakery and cafe offers a giant selection of cupcakes, mini cakes and their specialty ‘dipped’ cakes in singles, by the dozen and by the half dozen, so you can pop in for a quick treat or brighten up the whole family by bringing home a box full of sweet goodness. CupPrimo also boasts a staff of talented baristas who brew fresh, small batch coffee, lattes and cappuccinos every morning to start your day off right. Some funky cupcake flavors on the menu include Brownie Sundae, Nutella Surprise, Strawberry Limeade, Margarita, Rocky Road and Reese’s Ripoff. But if you’re looking for something even crazier, try the Boozy Car Bomb cupcake, wtih Guinness beer cake, whiskey pudding filling and Bailey’s Icing. You’ll need a designated driver after devouring this cupcake!