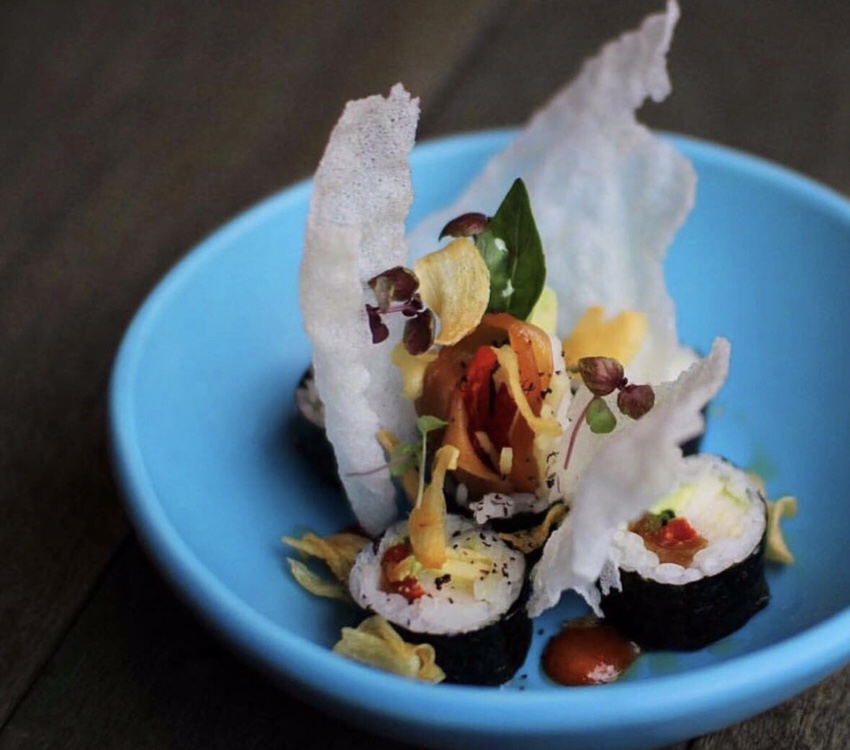 Austin may not be a coastal city by any means, but there’s still no shortage of fresh fish or delectable sushi options here. From sashimi to omakase, this wonderfully eclectic city is packed with plenty of pescatarian, rice-wrapped treats for all palates. And because Austin can’t do anything normal, this city has seen some of the most daring and downright bizarre culinary creations from chefs who aren’t afraid to throw caution to the wind. When Kipling said “east is east and west is west,” he certainly wasn’t talking about sushi! So if you’re looking for a serious change up from the conventional California roll or mundane maki roll, here is a list of some of the most inventive sushi rolls in Austin and where to find them.

One of Austin’s hippest and trendiest sushi bars, Lucky Robot serves up fresh fish, veggies and eclectic Japanese-fusion foods like Chicken Karaage and Su Bara Bap sashimi salad. This quirky cafe is also known for their creative robo-themed maki rolls, made with fresh local produce and named after beloved movie robots. Some popular sushi picks at Lucky Robot include the R2D2 with grilled Texas Waygu beef, the Sea-3PO with bigeye tuna and the Transformer with crunchy tempura shrimp. But among the most original of these sushi snacks is the meatless masterpiece Veggiepillar roll, made with miso-grilled eggplant, picked cucumber, avocado and spicy Serrano peppers. A fresh and zesty sushi option for the vegetarian with a Texas palate. 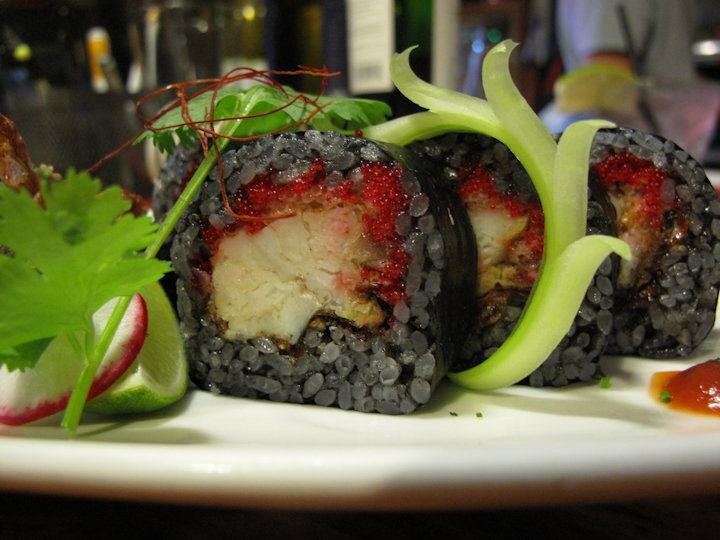 Located in north Austin, Mushasino is a traditional style Japanese restaurant that offers one of the only authentic Edomae Zushi (or Tokyo Style Sushi) experiences in the city. This high-end sushi spot has its seafood specially flown in from different parts of the world including Canada, New York and even Japan, to ensure that guests receive the highest quality fish available. Although the carefully curated menu at Musashino contains all the classic raw dishes, such as tekka maki and negitoro, you can also try a tasty Texas-born maki roll inspired by all our favorite flavors like the Rock and Roll with jumbo shrimp or the Good Time Roll with spicy crawfish. But the most innovative sushi sensation on Musashino’s menu has to be the dark and mysterious Black Widow Roll with deep fried soft shell crab, exotic habanero caviar, black squid ink-infused rice and a special housemade jalapeño soy sauce. 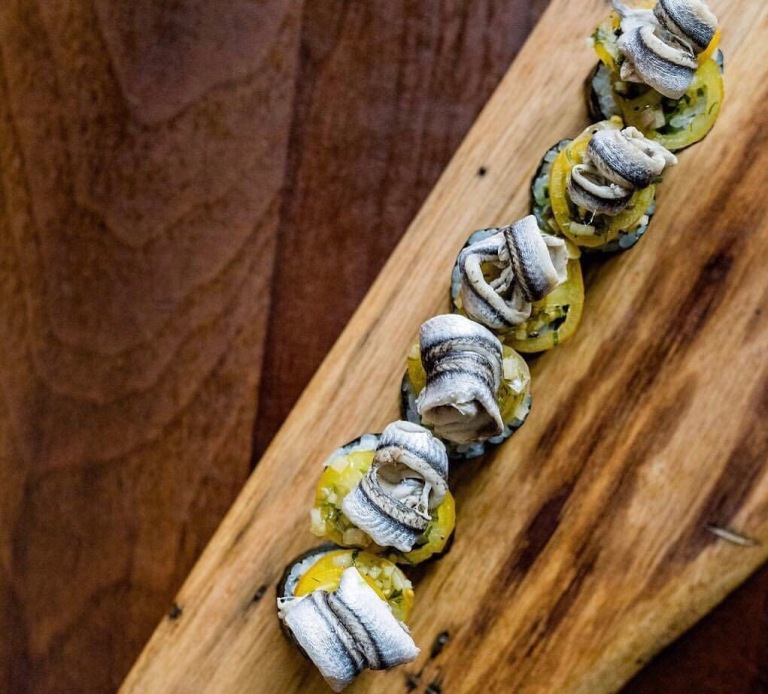 Built inside a charming bungalow in south Austin, Uchi (Japanese for “house) is one of the city’s favorite unconventional culinary treasures. Inside, guests can enjoy a feast for the eyes and the tastebuds, with high-quality, fusion-style hot dishes served out of trendy mason jars and ravishing raw creations that are sheer works of art for your eyes and your tastebuds. Some of Chef Tyson Cole’s most creative dishes include the Hamachi Nabe with yellowtail and egg yolk and the decadent Oishi Fois Gras ice cream with sourdough. But if you’re looking for a fresh sushi experience unlike anything you’ve ever tasted, then try the oh so eclectic Avokatsu roll with avocado, tomato and cured Spanish anchovy. 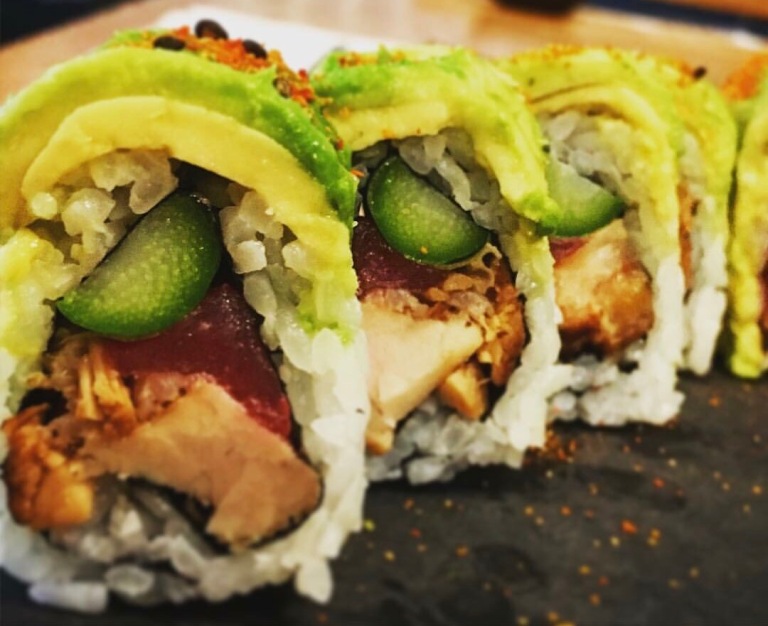 Tucked inside an unassuming little spot on Airport Blvd, Kome is a contemporary sushi kitchen that specializes in expertly made, home-style Japanese fusion food. Other than beefed-up bento boxes and sake-infused happy hours, Kome offers a great selection of traditional and original maki and sushi options. Most of the funky sushi rolls offered at Kome are inventive offshoots of our old favorites, such as the SuperflyRoll with eel and grilled salmon skin and the PhillyRoll with smoked salmon avocado and cream cheese. But the roll that steals the show in taste and ingenuity is the Austin original Green Belt Roll stuffed with pork belly, tuna and asparagus then topped with avocado and togarashi. 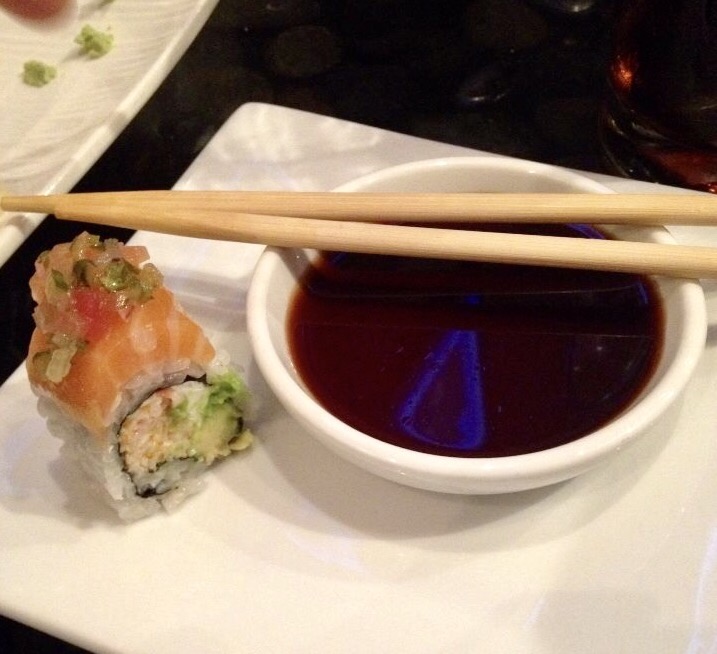 The charming, husband and wife run Tomodachi specializes in spectacularly fresh and creative sushi and Japanese-fusion cuisine. Some of the most popular dishes on the menu include fresh Japanese Horse Mackerel flown in from northern Japan and tasty wild yellowtail from the Honolulu fish market. But on their saucy sushi menu you’ll find a slew of tongue-in-cheek eats, each with its own edgy combo of ingredients, such as the Say my Name, Sassy Susan, Sex on the Beach and Something Wrong rolls. Among these kitschy creations is a south of the border sushi treat that walks the line between Tomo and Tex Mex, the Mexican Roll packed with spicy crab, avocado and cream cheese then topped with smoked salmon and spicy house salsa. 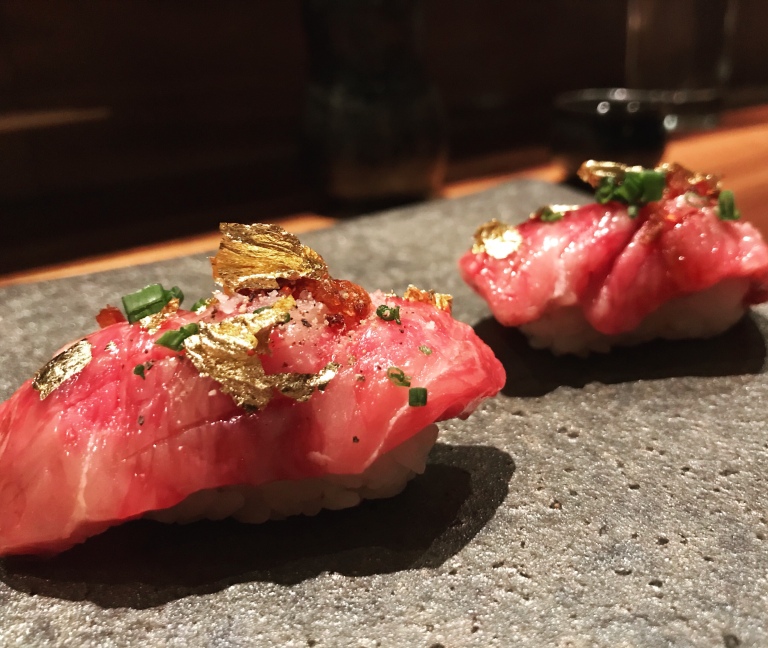 A5 Waygu Miyakazi at Soto Sushi

Though it’s technically not a maki roll, this sushi dish from upscale Soto in south Austin definitely deserves a mention! Set on hip south Lamar, Soto is known for their small but sumptuous menu offerings that are presented like works of art and decadent omakase dinners curated by the sushi chef. This modern take on the traditional Japanese eatery offers an authentic Japanese experience from start to finish, including warm eucalyptus-infused hand towels upon seating and a deliciously delicate amuse bouche of edamame purée to cleanse the palate. You won’t find any soy sauce or sriracha on Soto’s coveted sushi bar. Instead each nigiri, maki and sashimi dish is individually seasoned and spiced to perfection by the brilliant sushi chefs using decadent ingredients like caviar, lemon-honey vinaigrette and white truffle sauce. On the menu you’ll a handful of delicious specialty rolls like the Soto South Maki with torched toro, asparagus, cucumber, bonito flakes, jalapeño, spicy mayo and ginger sauce and the Toro Truffle Maki with white truffle, cucumber, shrimp tempura, spicy mayo and caviar. But among all the rich dishes at Soto like the Foies Gras Gyoza and melt-in-your-mouth Black Truffle Uni, the dish that stands out as the most decadent of them all is hands down the A5 Waygu Miyakazi. Presented in two perfectly balanced bites, this buttery, beautifully marbled steak tartar is topped with chives, shallots and 24k gold flakes just because! It’s almost a shame to eat, but it’s sure to be one of the best bites of sushi you’ve ever tasted!

Hidden in an inconspicuous strip mall in south Austin, Nanami is a quaint little sushi spot with fresh maki rolls and hot Japanese dishes for vegetarians and omnivores alike. Besides delicious Japanese fusion, this small cafe also has great happy hours, lunch specials and a handful of specialty rolls that break the maki mold. Among these crafty rolls is the Calamari Roll with deep fried calamari and the Majesty Roll with deep fried asparagus, egg and red snapper. But the tastiest creation among these rolls has to be the Robin’s Nest, a fresh mixture of tuna ceviche, avocado and cucumber wrapped in rice and topped with decadent butter-seared scallops. Of course this avian amalgam is served in the shape of a bird’s nest to complete the effect. 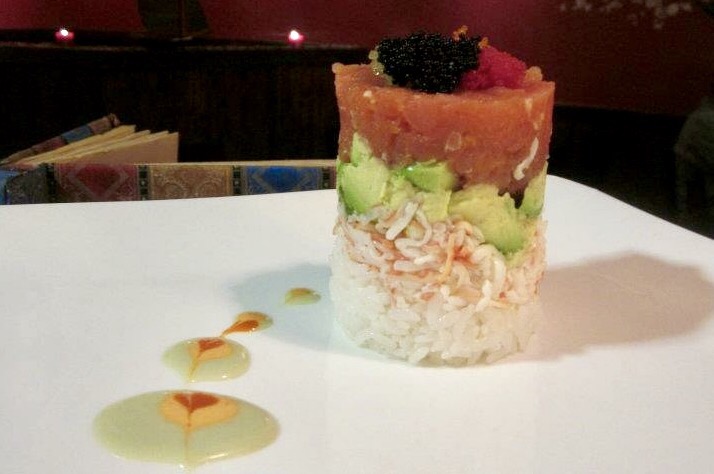 Located in the West Lake Hills region of Austin, Izumi is a Japanese restaurant that offers a variety of hot and cold Asian dishes as well as Teppanyaki style meals and fresh made sushi and maki rolls. If you’re not familiar with the Teppanyaki cooking method, it’s basically dinner and a show with an assortment of grilled vegetables and meats cooked artfully at your table on an open cook top. But no Japanese culinary experience would be complete without some seriously good sushi. So Izumi also serves up a vast array of fresh fish, traditional hand rolls and speciality sushi rolls including the Tiger Eye Roll with smoked salmon and calamari and the fiery Drunken Dragon Roll with spicy tuna and an entire eel! But the most unique seafood concoction on Izumi’s menu is a dish that turns the average sushi roll on its head – literally! Stacked precariously high with rice, spicy tuna, crab mix, avocado, and tobiko, the Red Hill Tower is a sushi “roll” that defies gravity. It’s definitely not your average hand roll though, so you may have to bust out a fork to feast on this one – unless you’re really skilled at chopsticks.

Set up in super trendy east Austin, Fukomoto is one of the city’s first authentic Japanese izakaya experiences. An izakaya is basically a Japanese gastropub that focuses on multiple-course meals served over several hours. Some scrumptious dishes from the kitchen include Kaki Furai (fried Hiroshima oysters), Chicken Yakitori (made with literally every chicken part) and takoyaki-style corndogs – which you definitely should try. Fukomoto also offers a handful of classic and specialty maki rolls made with all the popular fish picks: yellowtail, eel, mackerel, tuna and more. But among these swanky sushi rolls is a fruity, savory masterpiece known as the Usagi-Chan. This mouthwatering morsel is made with fresh salmon, miso cream cheese, apple and kale then topped with a creamy luna leche sauce.

Younger sister to Austin’s venerated Uchi, Uchiko is a unique Asian-style concept that offers a mixture of traditional and modern Japanese cuisine accented with original flavors and an undeniable Austin attitude. The inviting open dining area, designed to look like a Japanese farmhouse, makes guests feel right at home as they feast on some of the most imaginative fusion cuisine in the the city. On the menu you’ll find an assortment of daily specials, dinners and sake socials where you can get great deals on drinks, temakis and tastings. Uchiko’s main menu is bursting with fantastic flavors in the form of omakases, agemonos, sushi/sashimis and one-of-a-kind makimono hand rolls such as the Crunchy Tuna Roll and the Shag roll withsalmon and sun-dried tomato. But if you’re looking for a mouthwatering maki experience unlike any other, then order the bizarre breakfast-themed Ham and Eggs roll with katsu fried pork belly, creamy yolk custard and espelette pepper. This protein packed sushi plate will keep you replenished for hours!